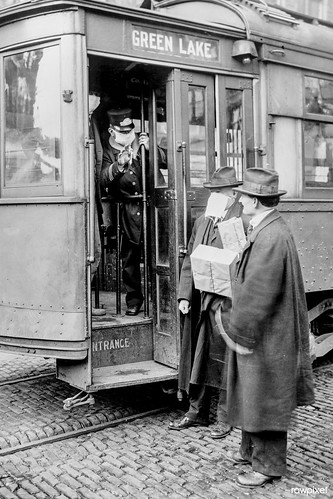 Precaution during the Spanish Influenza Epidemic would not permit anyone to ride on the street cars without wearing a mask, Seattle, Washington (ca.1918). Original from Library of Congress. Digitally enhanced by rawpixel. flickr photo by Free Public Domain Illustrations by rawpixel shared under a Creative Commons (BY) license

I’ve been back in the office daily (more or less) since August. Until then I had been mostly working from home, only working on campus 1-2 days a week staggered with my assistant so that we never overlapped. We only got regular access to the building in late Spring 2021. Before that, we had to ask for permission any time we came to campus, which really limited us. I know that lots of people started going back to their worksites earlier in the Fall of 2020, and others still never really worked from home.

Some of the hardest things about those first weeks of the semester were negotiating the new paradigm with myself and others. I had to work through my own personal feelings and anxieties of being around other people, finding places to eat outside, making sure other people felt safe, and reminding folks to comply with campus COVID policies. Coming in regular contact with others was a reminder that the pandemic has not been the same for everybody, and that we all carry parts of it with us every day.

It’s hard to think about the fear and uncertainties we experienced in the Spring of 2020 at the early day of the pandemic, but in some moments those emotions rush back when I feel overwhelmed by the number of people in my library, or seeing folks flouting local mask rules. I frequently say to myself, “I have spent almost two years keeping my family safe, is it all going to fall apart now?” But those moments are less and less frequent as I rebuild my muscle memory of navigating the world around others.

For folks just easing back into going to the office, there’s understandable culture shock that likely comes with every wave of reopening. There’s also so much trauma we’re still collectively processing, but it’s important to recognize it hasn’t affected everybody equally. In the U.S., COVID has hit “communities with high populations of marginalized and minoritized populations that have historically been disinvested in” the hardest. It has been a privilege to work from home (even when struggling with care obligations), one that lots of workers never were afforded. So as people are now confronted with demands to “return to normal”, they are working through some of the same fears others have just accepted or have buried out of necessity.

We’ve all had some threads that are woven through our experiences of the pandemic. Some have devastating losses of loved ones, jobs, stability. Others have been adapting to new social bubbles, binging media, taking up new hobbies, or accepting chaos. Early on I wrote about the need to extend grace to one another as we get through this moment, and that’s still true. I also talked about the need to recognize that things are terrible and to stop pretending, which is also true. It’s not to say everything is doomed, but it’s negligent to ignore the brittle precarity of the world right now thanks to huge inequalities and the looming climate catastrophe.

I have attempted to approach every interaction I have with other folks from a place of grace and care, but sometimes it’s hard. We’re all fatigued. When somebody wants to go through their need for hygiene theater, I have to remind myself that this is how they’re coping even though its misplaced effort. Or when people try to lecture me on health and safety standards, making up government agency acronyms in an attempt to give authority to their understandable fears, I try to focus on how to help them feel safe now. It’s frustrating because every location is different, and there’s a practical (and frustrating) need to balance what should be with what’s happening. Should workplaces have thorough ventilation audits of all workspaces? Sure. Did they perform them? No. And maybe my acceptance that this is just how it’s going to be is contributing to the problem, but after spending much of the last year and a half trying to conceive of the return to campus under shifting situations and rules I am tired.

Then there are folks on the other side of the equation – who are exhausted of the pandemic and ready to move on. Some have a fatalist view that everybody will get COVID, so there isn’t the need to stop it. Others look at the numbers and have decided that the statistical risk is fine, and even if they or others get COVID it won’t be too bad. Then, of course, there are the folks who have bought into conspiracies and disinformation around COVID and vaccines. Whatever the motivation, the results are similar: lax (or no) masking, no regard for other actions to minimize spread, and a belief that they won’t be affected. I just try to give these folks space, but also project clear boundaries — They might think indoor masking is pointless now, but lots of people don’t and it’s policy at the moment. They might want to eat in places that don’t check vaccine status, and I won’t even patronize those places for take away. That seems to the the rhythm.

But the most frustrating thing now, other than the state’s inability to actually stop the spread and the selfish nature of so many, is the lack of empathy and grace of others. And in some ways, that reveals how they have (or haven’t) adapted throughout the pandemic.

Last Spring and Summer, I was really depressed. It seems kind of inconsequential because it seems par for the course of a pandemic. When I get depressed, I withdraw and burrow inside my dark feelings. Aside from people giving me concrete asks or making it clear they needed an actual response, I disappeared. And because it was a pandemic and I was isolated at home, it was easy to avoid interacting with people. People who were also living through a pandemic and focused on their own issues. So as some things became critical, I finally started to re-engage and acknowledge I dropped out due to depression. Lots of people were understanding and kind, sharing their own struggles. One of my friends (who I had let down) told me after I opened up about my depression that I should regard vulnerability as self care. That I being vulnerable with others can really help – and by-in-large it did! I didn’t have to avoid folks or pretend this was a really hard period for me.

But then there were the folks whose response was, “Yeah, but what am I supposed to do about it?” And again, I approached that moment with care and understood that was a manifestation of their own pressures and stressors of navigating a pandemic. So I swallowed my annoyance at their kind of callous response to my vulnerability, followed through on what they asked but also couldn’t forget that their version of humanity in that moment. I pulled away from folks like that, but not from depression but wariness from those who couldn’t extend grace towards me or others a year into a pandemic. And so when some of these individuals I still interact with clearly are struggling with this liminal moment of opening up and they ask for grace and understanding form others, it takes all of my strength to not give them the same glib treatment they gave to me.

It is that schism that has stuck with me as more people are returning to working in offices and away from home. The narrow focus of many on their individual, personal situation to the exclusion of others. That they are the first to consider ventilation, or masking, or hand sanitizer stations. Others recognize the larger structures – either they have been working through the pandemic and navigating the complexities of public health measures, or they have paid attention and recognize the amount of labor that has gone into all of these issues. It’s not too different than issues around class consciousness, but that’s another ramble.

One response to “On space and realities: Navigating late stage COVID”