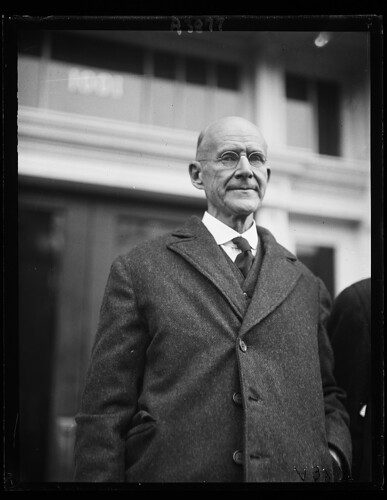 On this day in 1885, Eugene V. Debs was born. If you aren’t familiar with his legacy, Debs was an American socialist, trade unionist, activist, and perennial presidential candidate. You might have heard of him from Debs v. United States, a case in which the Supreme Court of the time ruled that Debs was not protected by the First Amendment when he gave (carefully crafted) speeches against the draft and military recruitment for World War I that went against the Espionage Act. Debs was incarcerated for 10 years as a result.

Debs’ biggest legacy is as an organizer. He was instrumental in so many important strikes and campaigns that radically changed US working conditions. There’s power in a union.

On election night 2016, I was in my local taqueria having a burrito with my partner filled with despair at the news that Trump was going to win the election through the undemocratic Electoral College. That moment helped us pick a name for our kid who was born days later, but it really made me recognize I was powerless to act. Instead of giving up, I started looking for opportunities to get involved. When I went back to work after parental leave some of my fellow library workers followed up with me about being more involved with our union. We were gearing up for contract negotiations but also we were showing up to campus actions against the Trump administration’s immigration bans and rallies for International Women’s Day. I started showing up. I got a t-shirt and I kept showing up because it was something.

The more I showed up and kept working, the more I realized the power of the union isn’t just in getting better contracts for my union siblings. It isn’t just improving working conditions for other workers on campus or in the field. It’s the network effect of all workers organizing together to make the world more just. And unions are a vehicle for political engagement that individuals can’t match due to collective action. I realized that the political work through my union not only would make the bread and butter issues, like pay and benefits, easier to win, but also help the community we’re a part of. Unions, and other political activist groups, are an important conduit for political education and power analysis, which only individuals with obscene amounts of money can achieve. I started living the lyrics of “Solidarity Forever”.

So election night 2020 was very different. Because I had been reading things like this essay by Jane McAlevey “Getting Out of Tight Corners,” I knew that regardless of what the polls said in October there was going to be a lot of work to do through November. Because I actually read the emails from CFT, I knew we had to make sure every vote was counted and the results were not going to be clear for a while. I channeled my nerves and anxiety into figuring out what that work would be and telling all my union siblings, friends, and anybody else how to join in. Not only do I feel like I’m doing something, but I also don’t feel alone. The support and community from fellow workers and my union siblings is a bulwark of despair.

I also know which side I’m on. That was one of the wake up calls I had in 2016, and I think many are having it in 2020 – this is the moment for us to demonstrate which side we’re on through actions. I remember reading about average Germans in the 1930s and through the Nazi era – how powerless they acted, but also complicit. I also think of all the nice white folks who didn’t do anything during the Civil Rights Movement of the 1960s. Phil Ochs’ “Love Me I’m a Liberal” is timeless.

That’s why yesterday I rode my bike to an action with my union siblings and I feel a lot better this morning.

Like so many other people I couldn’t focus today, so I rode my bike to Oakland and heard from so many and it really helped. Thanks for the shirt @CFTunion! See you Saturday. #CountEveryVote #ProtectTheResults https://t.co/s9MbySbUnw

See you in the streets.