Librarians, libraries, and politics: When governments gets irrational 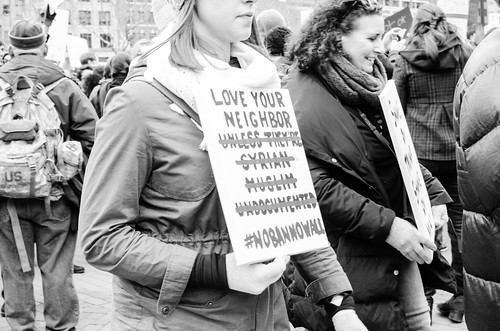 I’ve been trying not to think about work much while I was out on parental leave, but it’s hard given how much I love my job and how the new administration has really made for interesting times. This blog has been quiet for a while because my job was really consuming in the run up to my leave, and then I had this kid, #babymoonbeam, and he’s kind of time consuming.

But given the near insanity of President Trump’s first month in office, I don’t really want to see what the next 40 will bring. This has been enough chaos. I remember the transition from Bush to Obama, and while there was some uncertainty it was all pretty measured. Nobody seems to know what’s going on right now and it seems like we’re all resigned to being on edge and a life of chaos. This story about the state of the State Department is a bleak example. You also have the Internet Archive preserving websites and moving servers to Canada just in case. Then there are the efforts to preserve government data from being wiped. For many of us, our jobs are caught in a political quagmire made worse by the uncertainty. (We’ll not even deal with the headache of balancing state and federal mandates when your state is openly defying the federal government, basically saying “COME AT US”. )*

I do take some heart that many of my colleagues are engaged in helping. Of course the cynical radical in me has some thoughts along the lines of “oh, now you’re paying attention…”, over all it’s been pretty positive. I think that action is a kind of self-care. Doing something gives us agency as we wait for things to shake out. Instead of rolling my eyes at my colleagues explaining how the government works and how to research government info to me, I’ll give them a thumbs up. (Though OK, come on – please have some self awareness that maybe you’re not the first librarian to dip their toes into legislative waters and researching this sort of thing. I can see how many ALA/ACRL members might not realize there are people who have been doing this their whole careers, but we’re supposed to be good at research!)

The thing that spurred me to start post was about SLA’s lack of response about travel ban executive order. It was too political. You know I firmly believe we’re political by the very nature of our jobs, and this year has not only affirmed that to me but really hardened that belief. I know I need to figure out my personal boundaries between personal and professional politics, but I’m not going to pretend that the very act of preserving publicly funded research isn’t considered political in this climate. Anybody (and this is pretty much all librarians) who works with government information now has to be vigilant and cynical. It’s a sorry state of affairs and might take time to adjust, especially if this isn’t your natural outlook. (Growing up in Sacramento and being obsessed with then dysfunctional state politics as a kid has served me well!)

*Background on the history of Governor Moonbeam.