ABC – Always be curious. On discovery and ethics. 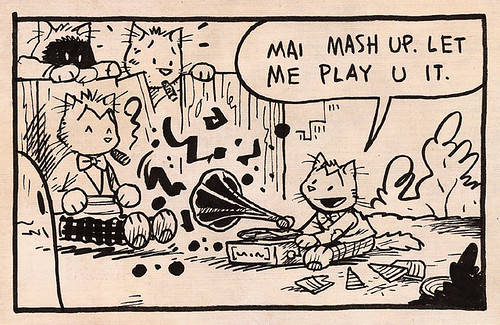 Last night I attended a joint SLA Silicon Valley/SLA SF chapter event which was dinner and an engaging talk from Brewster Kahle. He talked about the mission of the Internet Archive, which through many facets can be distilled down to “Universal access.” It’s a huge goal, a paradigm shift, but also something I really hope they achieve. Society will be much better for it.

The evening started with a personal anecdote of somebody using the Wayback Machine to find a ship’s manifest with a great grandparent’s arrival to America. Pretty touching stuff. We all use it for hunting down lost tech reports (thanks public agencies) or for vanity nostalgia (have you seen this horrible old site I made long, long ago?). But of course the Internet Archive is way more than the Wayback Machine, and I was mildly surprised many people in the room didn’t know about that. Most were familiar with Open Library, but it seemed like the audio, video, and software archives were less of a thing. In all honesty it is hard to keep up with everything they do, but it’s also worthwhile to explore all of the services.

Of course I would say this as somebody who loves digging through obscurity. When I curated that set for the Open Textbooks presentation, I spent considerable time lost in the 78 RPMs and Cylinder Recordings collection. It was easy to get sidetracked by my fondness for yodelling. There’s also the whole Over The Edge Radio archive, which was Negativeland’s radio show (got it’s start on KALX!). If you’re at all interested in the history of remixing and love artists like Girl Talk, you need to have some familiarity with the work and legacy of Negativeland.

For the videos, there’s just so much there. I love the AV Geeks collection of old traffic safety films – they’re a great glimpse into past attitudes and safety measures. But then, there’s also my favourite film on the site: Let’s Make A Sandwich, which is delightfully gross. (I’m sorry, “tuna rarebit” sounds disgusting.) There are also the wonderful Prelinger Archives.

There’s a lot there, and you should give yourself an hour to browse around it and find something that interests you. This sort of exploration and curiosity is important to keep us librarians fresh. Some of it might be directly relevant to your work, but exploration just for its sake is a valuable muscle to flex.

There was one question from the floor at the end of the night that really stuck out to me. One person asked Kahle, “Do you work with the Copyright Clearance Center?” After a small moment of silence, Kahle answered, “No, do you?” Which the asker affirmed they did. I almost let out a nervous laugh, but it was clear that the librarian who asked the question didn’t know that many, particularly librarians, have issues with the CCC. We should all be aware of the ongoing lawsuit Cambridge University Press v. Patton, in which three scholarly publishers sued Georgia State University for copyright infringement through its e-reserves system. The CCC helped fund the plaintiffs. Some librarians have started discussing ditching CCC because they are advocating more a more extensive reach for copyright, which will limit access. Aren’t we as a profession about access?

I cringed inside when the person asked the question, not just because I personally dislike the CCC and efforts to restrict access (usually for profit). I cringed because it’s 2016 and I really expect my colleagues to be aware of these issues and the players involved. Even if you love the CCC and use their services, you should know lots of people take issue with the state of copyright. You should know Creative Commons. You should understand the layers of Open Access. You should also be familiar with Fair Use. I don’t expect all librarians to be legal experts on these matters of scholarly communication and intellectual property, but at least to have a familiarity of what the common issues are and where to go to get answers. It’s incumbent to our job in finding information from lots of different services and critical to being stewards of access. Too often I think many of our colleagues don’t look up from their desk and just outsource the thinking to others, like the CCC, and so we’re stuck with their interests which might not really align with our mission of access. I often think it’s a combination of fatigue and fear, but it’s still frustrating to watch.

It reminds me of something that happened last week – where publisher’s tried to assert that the piracy of Sci-Hub is librarians fault for making stuff inaccessible. Yeah… It’s our fault… and no doubt there might be a librarian who read this article in Science and thought, “yeah! we make it difficult! for shame!” But of course that’s ignoring the power and role of publishers in this equation. Poor publishers. It just affirms my stance towards piracy: Piracy will continue to thrive as long as it’s cheaper and more convenient than legal means. So don’t encourage the systems to improve, support the status quo and punish the people who optimize access (for them). (And yes, I know it’s not legal and I don’t advocate breaking the law, but it’s also kind of human nature at this point.)

So my point to this long post is basically this: Librarians need to always be curious. We need to keep our ears and eyes open, evaluating new things, and questioning everything. We also need to be aware of ethical issues and implications of policies we might be advocating. Too many librarians (particularly in SLA) brush this off, but if we actually care about access to information, then we need to be looking at information ethics. It might go beyond our desks and our jobs. We owe it to ourselves, the profession, and society.