Libraries are political and so are librarians. 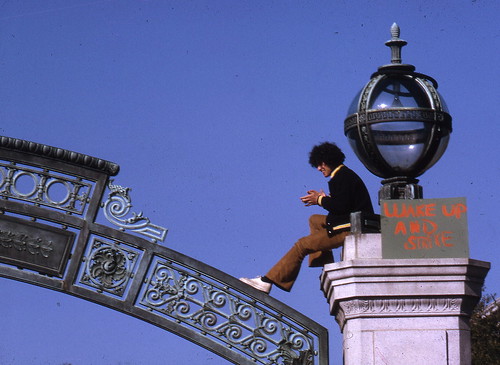 This post has been stewing in my head for a while, but I feel like it’s time to finally push it out because the main theme keeps coming up.

Today I saw some colleagues share this post about Storytime Underground tweeting about librarians having opinions (particularly about Black Lives Matter). I have nothing to add other than a “right on!” to them and a “duh!” to anybody who might be surprised. It has a pretty public library slant, but they make the point that our community (patrons and colleagues) needs to encompass everybody, but particularly those who have the least power.

Libraries can’t pretend to be neutral because we’ll just prop up the power structures that are already silencing, alienating, and hurting our communities. If we’re really going to carry out or mission, then we need to focus on serving everybody even if that makes some people uncomfortable. There are (mostly public) libraries all over working in this area. During the unrest in Ferguson following the death of Michael Brown, the Ferguson Public Library was a rallying point and a safe place for the community as it was going through turmoil. Ferguson librarian Scott Bonner was rightfully heaped with lots of praise and support from the library community. There’s also good stuff happening at San Francisco Public Library where they have a social worker based in the library to help its homeless users. These are just two examples, and there are many more. There are people doing good work through the hashtags #radlib and #critlib (though I kind of think #critlib skews very heavy on academic theory which can be a barrier). Let’s not forget librarians speaking out against bad legislation and policies like TPP or PIPA and SOPA.

As much as some people want to act like it’s not the case, libraries are inherently political and by extension so are librarians. You might not have been attracted to the protection through a sense of activism or political freedom, but it’s an intrinsic quality to our work. To deny that is really limiting the impact of your work. I would even go so far to say it potential perverts the mission of a library as well, but that might be my sense of outrage taking it a step too far. (But maybe we need to go there?) It’s why I really believe it’s our professional obligation to support radical changes to publishing models, such as Open Access and Creative Commons, to make information (and therefore knowledge) more accessible for everybody. Just because you work for a place that can pay for access doesn’t mean we shouldn’t push for more equal access for those around the world. Current models benefit the monied establishment, academics and publishers, leaving out those without (the public).

Any long time reader of this blog knows I frequently wade into political, radical waters here. That’s part of the reason I was attracted to libraries – preserving and ensuring access to all. I’m fortunate to be working for public university where I am able to keep a mission of making public research accessible for all. I’m doing my small part to be a good steward for our institute despite resource limitations, and I advocate for better practices from the rest of the community. Lots of people do this as well. They get it.

What I am tired of is the belief that librarians don’t belong in these spheres. When there was discussion about SLA moving its 2018 conference out of North Carolina because of the heinous, transphobic HB2 “bathroom bill”, I was really disappointed by the response from my colleagues. I don’t expect everybody to share my views, but to dismiss extremely valid concerns from fellow SLA members about transphobia was disheartening to say the least. Some felt it was a political stand and that SLA shouldn’t be in politics, it’s not like ALA (which is apparently a good thing). It seemed to them these issues were hard, painful, and divisive and it was easier to just ignore it and maintain the status quo. These are librarians who just do their job and then live their lives, like normal people, not questioning the power structure. Totally human behavior. It’s also frustrating to confront.

Also frustrating are those who get angry when things get really bad – like the recent Orlando shooting at a gay nightclub during latinx night, or the deaths of Alton Sterling and Philando Castile. Or maybe even when a software platform buys another, or some previously open source hardware becomes proprietary (like the Raspberry Pi). To these folk who have periodic outrage, I have to ask “are you paying attention? or only when it gets really bad?” One thing that keeps pushing in working for justice and equality professionally and personally is a constant sense of anger about the world with some optimism. I think we can do better and should work for better, but I also recognize this is a horrible place, with lots of injustice, and lots of reasons not to trust people, companies, or governments. That’s why it’s imperative the libraries and librarians work to keep this world from being closed minded and proprietary in many forms. It’s why I love the Library War manga series, where librarians are actually fighting battles to preserve freedom. I’m not saying we need to take up actual arms, but we need to metaphorically get into the street and make sure every transaction is a conscious one.