A library? What’s that? Nobody knows. 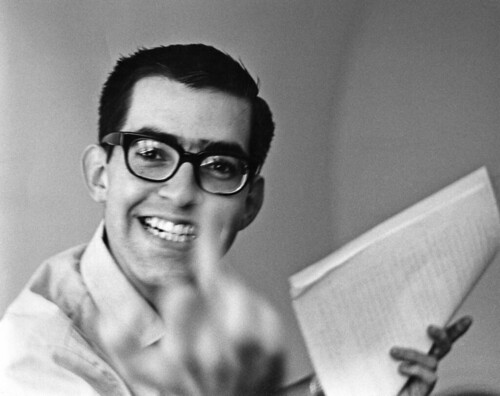 I don’t know this fellow but I like his glasses and appreciate his style. I also identify with his expression in this photo: cheerful frustration.

This week there’s been a lot to make me question what’s a library these days and why does it matter. Perhaps it’s the inevitable existential dread of a steady stream of (totally valid and inevitable) fear and anger about global politics. It makes sense then, that librarians are trying to figure out where they fit in during this tumultuous time, and question the world around us.

The main thing that has raised my ire is the response to a recent article by Jane Schmidt and Jordan Hale about Little Free Libraries (LFL®). First of all, it’s depressing how many librarians didn’t actually read the article. They just skimmed posts about it, like this one, and got upset at a perceived attack on literacy. (Reading comprehension, what?) Secondly, in this time of heightened anxiety, fear, and fake facts, people are very quick to react emotionally. I think we’re so used to feeling deeply betrayed when we find out people close to us have different, seemingly fundamental views, so that criticising something so seemingly benign as your LFL® seems on par with saying you hate books or kicking puppies. Nevermind that the research was a critique of the LFL® model and its stated goals. I found Schmidt and Hale’s research to be refreshing in that it articulated a lot of misgivings I have about LFL®s in my community, and gave me some ideas for some research of my own.

There was also a post going around this week by Stacie Williams and how it’s impossible for libraries to remain neutral today. Longtime readers of this blog know I have strong feelings on this subject. Go ahead and read some of my old posts about how everything’s political. It’s 2017, we can’t pretend we live in a world where this sort of thing doesn’t matter. Professionally speaking, maybe it doesn’t matter to you but it probably does to your colleague or user, so is it OK to keep on acting like the status quo is OK? Libraries and librarians do need to look at out roles in systems of oppression and ways we can be forces for good, but what that entails will be very different depending on your library.

I have been struggling since I got back from my parental leave with figuring out what my library is supposed to be because I have no idea what libraries are anymore. One thing that stood out from the LFL® controversy is that a lot of people assume a box with free books is a library, which rankles many librarians. They might argue that a box with books and a librarian makes a library. Do you need books or librarians (read: staff) to be a library? I don’t feel comfortable to answer that because it seems to ignore context and on the face of it be a knee-jerk preservation of our profession.

Much of the discussion about libraries I see in the literature (read: Twitter) is focused on public and academic libraries with large, diverse user populations. These libraries try to be all things to all people because they have to be through necessity of function and funding. As our local municipalities cut funding for social services, it often falls to libraries to fill the gap. Is that a good thing? Is it sustainable? Should it be lauded when a library becomes the community’s de facto drop-in shelter for homeless folk because the citizens and government won’t actually fund a proper one? What about academic libraries filling the needs of students because there isn’t enough student support on campus? Is that how to maintain funding long term? (Funny how this all seems to be tied to funding.) So from these definitions, it seems a library is a place that may or may not have books, does have access to material, staff to help navigate that stuff, and space for people to use that stuff or not. It’s not really a satisfying definition.

Of course missing from these discussions are the roles of all the other libraries. We talk about librarians fighting to preserve government data, but what about the librarians in those government agencies? What about librarians working for private corporations? Law librarians at legal firms? Most of these conversations ignore them because it doesn’t fit into the convenient narrative, but also because most people don’t have a direct experience with them so it’s harder to articulate what they are and why they matter. This is also where a lot of the assumed ethical imperatives of the profession get a bit more complicated. If Open Access is an assumed good (read: it should be the default, duh!), where do librarians working publishing companies opposed to true OA fit? What about librarians for defense contractors? Digital Asset Managers for companies where everything locked down? Are they not part of the profession? Do they not work in libraries?  I’m getting sidetracked, but it’s easy when I think about all the constituents I have to work with. If your organization’s function is part of systematic oppression, does that make you less of a librarian? In this capitalist society people need jobs to get by, and unfortunately sometimes you might have to work for the oppressor. That’s just reality.

So what makes MPOW a library? We have books, so I guess there’s that but I give that another 10 years. We want to provide resources and data which requires working with government agencies and private companies and given funding models for transportation, it’s likely it will all be licensed from private sources in the next decade as well. Also given the competition for research funding, I’m not sure how realistic it is to be completely open about things because it’s either giving up a competitive advantage for grants or we’re getting funding from a private company with a requisite NDA. As public funding of public research universities dries up, this is inevitable. I guess it’s that we’re a space of collaboration and exploration, which we have been for decades. They can’t take that away from us, but do we need librarians for that space? I think we’re trained to help mediate that discovery, so yes! Articulating that value is extremely difficult, especially without relying on outdated memories of going to the library as a child.

And those realities are why it makes it hard for me to deal with a lot of the discussions about what libraries are or should be doing, because they frankly have pretty narrow views of the profession. I fully believe libraries need to be as inclusive as possible for all of their populations, but I can also understand why it some libraries don’t put up signs showing how inclusive they are – because it would be out of place or perhaps contrary to their organization’s policies and missions.

So basically, I don’t know what it means to be a librarian or work in a library anymore, or even what a library is, because they are so varied to so many people it’s becoming meaningless. I would say it’s a philosophy or spirit, but I’m not sure that’s true anymore. Is it about the democratization of information? Access? Preservation? Navigation? I’d like to know.