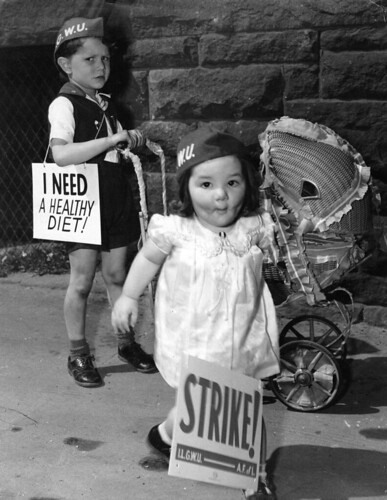 Two young children push a dolls carriage and carry signs in support of their parents’ strike. Their signs read “Strike!” and “I Need a Healthy Diet!” flickr photo by Kheel Center, Cornell University Library shared under a Creative Commons (BY) license

Since I last wrote about library worker solidarity last month, something has really been weighing on my mind about ways to actually achieve worker solidarity in libraries. I’ve asked other union librarians about this, and the lack of answers is kind of telling. When librarians organize and unionize- just like every other union – the focus is on their situation. Eventually, they might look to other librarians but it’s still the profession sticking to its class. But what about other workers and their unions, particularly those in our libraries? The strike this week across the UC system put this into focus again for me, as many aspects of campus and library services were disrupted despite efforts to minimize its effects. When we were told there would be no mail pickup, or when I had people cancel meetings, I rolled with it (and though good on them).

Librarians – you need to look at your whole organization.

And then the obvious…. Librarians – we need to do better in supporting our colleagues across the organization in their struggles for an equitable workplace.

This seems pretty obvious, but I think we as professionals (and often academics) have behaved in a way that puts us apart from other kinds of library workers that has been quite divisive and damaging.

The classic example is how librarians talk about deprofessionalization. We’re not staff, we’re professionals. Which makes many rightly bristle – aren’t all of our colleagues professional? Just because a library’s administration created a position that probably should have been classed a librarian but wasn’t, you still need to support the people in that position. It’s not their fault the job that was open doesn’t have the same rights, responsibilities and privileges that a librarian would have. One way to do that is to work to get them those rights and support them in that way.

At a time when my union is bargaining for a new contract, it’s made me wonder how can we meaningfully support our colleagues in other unions achieve more equitable contracts and working conditions? The quick answer is to show up and support them when they strike.

The long answer is that librarians need to eat crow and apologize for past slights and insults. We need to begin with reflection and self education. Recognize the importance and dignity of all work, and embody that belief. Libraries are complex systems and operations that need lots of different kind of workers to function. When I hear librarians laughingly plead ignorance about bib records because why should they actually need to worry about them, it’s embarrassing and offensive. (And also reflects the deprofessionalization of tech services…) So think about what you are going to say and be careful with how you say it. I know for a profession of people who tend to be driven by words, we can often be very pedantic and precise with our own, but also carelessly punch down. So much that I think most people don’t think they’re going to do it.

I will probably have more to say about this in the future, but I just had to get this out today.