More on Library Workers: What path is your position on? 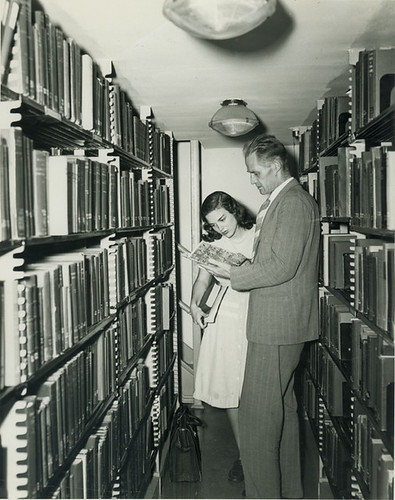 Faculty Member helping a Student in the Stacks, 1948 flickr photo by lizkentleon shared under a Creative Commons (BY-NC) license

I am hiring a new circulation manager for my library. It’s a staff position. It will be posted any day and I know I will get lots of application that will reflect a wide array of library job seekers. Some will have lots and lots of circulation and tech processing experience, having worked for years in different libraries, but without an MLIS. Many will be enrolled, completing, or just finished an MLIS program with experience in research and instruction, or digitization projects, but no actual experience in circulation and tech processing. This is a circulation job but they aren’t really qualified for it because it’s a type of library work they’ve never done. (Most librarians are woeful when it comes to circulation.)

As I prepare to sift through the applications, it’s hard not to think about when I applied for this position 13 years ago. Everything was different here. We had more staff, no ILS, and a more traditional focus. I had been a student employee for a year and really loved the work. Applying for the circulation manager position was really my commitment to libraries (and I guess this library in particular – I’m still here). Less than a year after I was hired, the library director Dan Krummes pulled me aside and asked me what my career plans were. What did he mean? He bluntly said if I wanted to stick around this library for more than a couple years in that position I should go get my MLIS. Otherwise I should take some time to figure out what I want to do long term and work towards that. I applied to library school the next week.

When I was getting ready to graduate on and started applying for jobs, they had a librarian position here at my library ready for me. After a couple interviews elsewhere, they hired me on a temporary emergency appointment. (I’ve since applied for this job two other times.) The reason they were able to do that was because Dan made sure there was an unfilled librarian position that could be filled. When the offer was presented to me, it was clear that he saw me as the future of the library and wanted me to stick around. He had a similar history, starting here as a student employee, getting his MLIS, getting hired as a librarian, and then eventually becoming director.

When I was hired as a librarian, not only did I recognize I was following Dan’s path but also that I might be the last of a kind. That because it’s exceptionally rare for people here at this campus to be hired into the librarian series from a staff position without getting librarian experience elsewhere first. (When I made the leap, I definitely felt iced out by some of my colleagues who were staff and couldn’t make the same leap. I still feel residual guilt from the situation.) There are many people in library staff positions with their MLIS degrees doing good work, but for a variety of reasons it almost never happens that they then get hired as a librarian. In my library, this circulation manager position is kind of terminal for now based on our budget and organizational needs. I hope that will change some day and we can have more staff and more opportunities to grow, but right now I know what the budget will support. I make sure when I hire people that they know this is a job that will help build skills and provide a stable working environment, but it most likely won’t be a stepping stone to being a librarian on campus at this point in time.

So when people apply to these staff positions, trying to get their foot in the door for a librarian position – they are getting a foot in the door, just not the door they’d like. And as I’ve mentioned several times, all library work is important. So it’s not that we should value one over the other, but we need to acknowledge that this kind of how things are so that everybody is on the same page. Not everybody who earns an MLIS wants to be a librarian and all of the “rights and responsibilities” that come with that classification. One previous circulation manager here dropped out of library school when they decided that being a librarian was just too many meetings and committee work, and they’d prefer to move up the staff ranks and fix things. They weren’t really wrong.

Now in addition for us to be honest about the barriers and paths of different job ranks, we also need to think about how people can grow as professionals in whatever job. So if that is similar to the discussion Dan had with me where he asked my longterm plans, that’s not a bad thing. People don’t need to all aiming to be the director or the university librarian, but helping workers grow and thrive requires conversations about goals and wants. This will help them do their job better and be in a good position to get another job when they feel the time to do so (or the need arises). Fostering an atmosphere for honest discussions like that will hopefully minimize fractures and resentment, and help everybody feel valued in the organization.